I’ve written before about art historian Beatrice Farwell’s theory that Félix-Jacques-Antoine Moulin photographed Victorine Meurent in 1852. The date doesn’t fit with other information we have about Meurent, but the photos Farwell used to support her argument (found in the Bibliothèque nationale de France) still fascinate me. 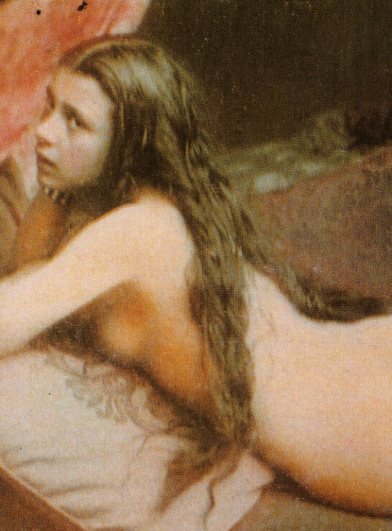 Moulin had a studio on rue du Faubourg Montmartre—a studio with two entrances, one “more respectable” than the other, according to Hannavy’s Encyclopedia of Nineteenth Century Photography. The push toward respectability came about after Moulin was fined and sentenced to a month in prison for his “obscene” photos. The Cour d’assises de la Seine determined that even reading the titles of Moulin’s photos would be a “violation of public morality,” so the court proceedings were held behind “closed doors.” And the photos in question? Hannavy says they “disappeared.”

I don’t know what Moulin’s “obscene” photos were like, but the old “But it’s art!” joke seems to have been in play in the 19th century, too. Hannavy states that photographs of naked women were often called “academy…studies,” even though they were only “nominally for use by artists.”

I find both beauty and art in many of Moulin’s works. The Metropolitan Museum of Art owns one of Moulin’s photos and declares the image “seems more allied to art than to erotica.” Here’s a detail from that particular daguerreotype, taken from Wikipedia:

(Click here to see the full image from the Metropolitan and to read the museum’s commentary.)

Félix-Jacques-Antoine Moulin plays a small but crucial role in Paris Red. And though art historians disagree about whether or not Manet used any photos in his painting process, I take a fictional stand on it in my novel.