As I wrote Paris Red, I had two book talismans: The Lover by Marguerite Duras and Coming Through Slaughter by Michael Ondaatje. I kept those two books on my desk and sometimes by my pillow.

I turned often to Duras to see how she created a young narrator who appeared self-possessed and self-aware, and to examine her hypnotic sentences. (The paragraph at the top of this post is from The Lover.)

I turned often to Ondaatje to see how he grounded his fictional story of Buddy Bolden in actual historical details without ever letting the story get bogged down by those details—and to revel in his mixing of forms on the page. Throughout the book he allows lists, poems and sometimes single images (“passing wet chicory”) to nestle alongside his paragraphs.

I always have book or short story talismans for my novels. I don’t know if I could have written Swimming Sweet Arrow without studying Alice Munro’s story “Turkey Season” and keeping it in front of me day after day at the public library in Iowa City, which is where my first novel really took root back in 1989. But I also needed all of Hemingway’s Nick Adams stories to write SSA, including the brilliant and unfinished “The Last Good Country.”

Books usually become talismans because of what they show me about voice or form. Yet there’s also the emotional strength and determination talismans give me. I needed to know from Alice Munro that it was okay to write about something like working on a chicken farm, that you could put that kind of a life down on the page. So yes, my book talismans often act as models and guides, but they are also touchstones, and their physicality matters. The books themselves are solid beneath my fingers, familiar presences in the different rooms in which I write, and I can find them by feel in the dark. And sometimes the talismans become beings that whisper in my ear, urging me to continue writing because

If you don’t shake, don’t get no cake.

I had several other book talismans for Paris Red that featured paintings and photographs (including Richard Cobb’s The Streets of Paris), and those books were equally essential to me for different reasons. Here’s the title page of one book of photographs that was so powerful I had to keep it wrapped and stored inside the drawer in my nightstand: 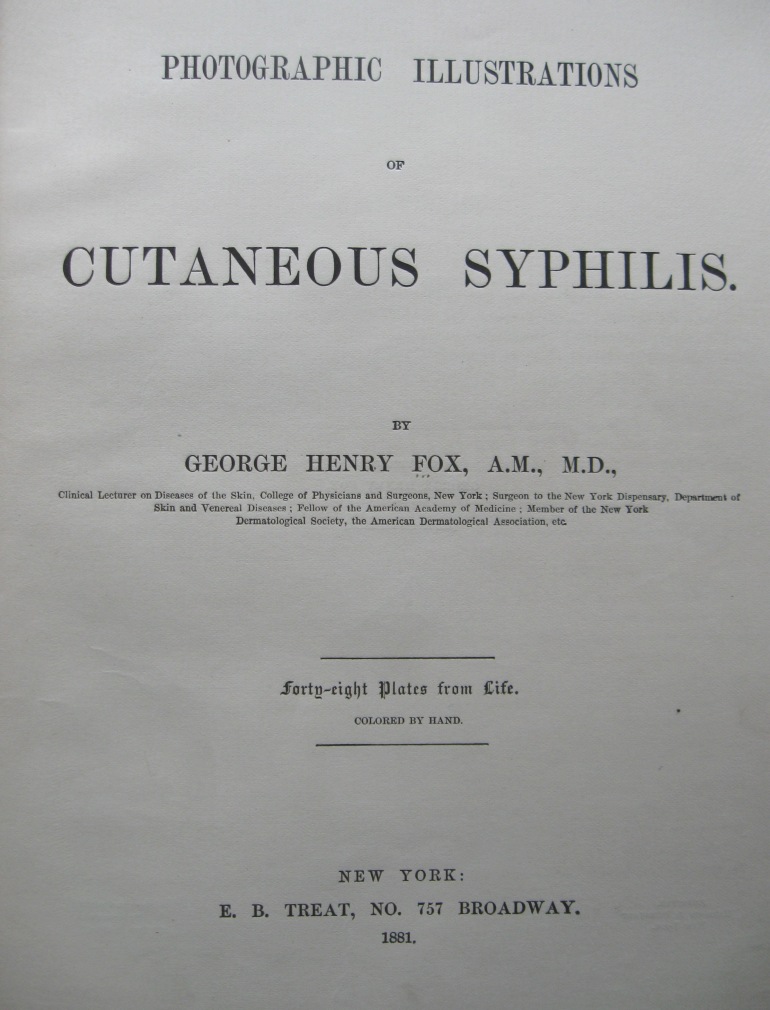 George Henry Fox’s 1881 Photographic Illustrations of Subcutaneous Syphilis contains hand-colored photographs of people with syphilis, and each of the “plates from life” is protected by its own sheet of tissue paper. The book was once in the Yale University Library, a gift from Dr. J. H. Russell, but it was stamped “withdrawn,” and I purchased it in 2010 from a rare book dealer. I’ve never admitted to anyone how much I paid for it.

This particular book talisman was so potent I couldn’t look at it very often. Even now that I’ve finished writing Paris Red, the Fox book remains a strong force in my life.

I draw on its power sparingly.