My main character in Paris Red is poor. When Victorine Meurent meets Manet, she’s working as a brunisseuse, or a silver burnisher, and she has very little money to live on. She eats as cheaply as she can, buying her meals on the streets, and many days she gets by on bread and soup—soupe aux choux, or cabbage soup, and sometimes potato.

I loved writing the scenes where Victorine stands, spooning soup, and I had no shortage of artwork and photographs to help me imagine things. The image at the top of this post is titled Soupe un Matin aux Halles Centrales and was painted by an artist named M.E. Gotorue and was apparently part of the Salon in 1886. (At least that’s what I can make out from the caption at the bottom of the image online.)

Here’s another image, this one a photograph. The only part of the caption I can make out at the bottom is “Paris” and “Halles.” 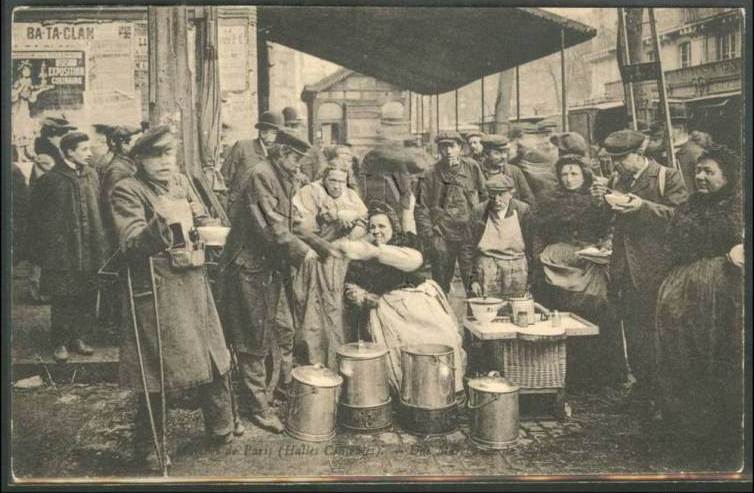 From these images, I was able to write this portion of a scene, which takes place on a day when Victorine isn’t sure when she will get paid again.

I see the people around the marchande before I see her there on the trottoir, underneath an awning.  She sits with four kettles around her and dishes up from the kettle right in front of her, the only one with the lid off.  For ten sous you get a small piece of bread and a ladle of soup.

Still soupe du matin but so late that I get the bottom of pot where the creamy broth has thickened with chunks of cabbage and leeks.  At first I smelled the soup, so blindingly cabbage that it perfumed the air for a block, but now that I am standing here, eating, I cannot smell it.  Can only feel the fullness in my mouth and the warmth going down.

Three workers in their aprons and caps stand there with me, slurping.

When I’m done, I hand my bowl to the old man sitting beside the marchande, who has been steadily washing bowls and spoons in a wooden bucket.  I finish before any of the workmen.

The first meal of the day, and maybe the last.  I should have taken my time eating it.  Should have been more like the workmen, who did not eat as quickly as I did for fear of leaving most of their soup on their mustaches.

I love soup. For me, it’s the perfect meal. One of my favorite soups to make is lentil minestrone, which has lots of spinach in it, and a chicken base. Sometimes I eat it for breakfast. It’s just another way to feel close to Victorine.