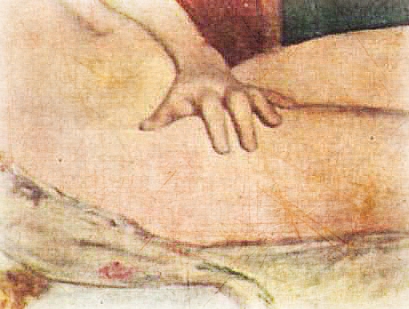 Paris Red will be published by W. W. Norton in the U.S. in April 2015. Right now that seems like a long wait, but I know it isn’t, not in the world of publishing. In one very important way, it is also an ideal time for the book to come out because Spring 2015 marks the 150th anniversary of the Salon of 1865, when Manet’s Olympia was exhibited for the first time.

If you’re familiar with Olympia, you probably know there was an uproar when people saw the painting. Critic Jules Claretie called the figure in the painting a “yellow-bellied Odalisque” and wondered where Manet picked up the “vile model” who posed for the painting. Others described Olympia’s flesh as being “dirty” and her expression as “grotesque.” Manet’s friend Antonin Proust said that the only reason Olympia wasn’t “slashed and destroyed” was that Salon authorities took precautions in where they displayed the painting.

You can get a sense of the kind of person who stood in judgment of Manet from this 1865 sketch by Honoré Daumier. I don’t think you could get a more pinched nose! 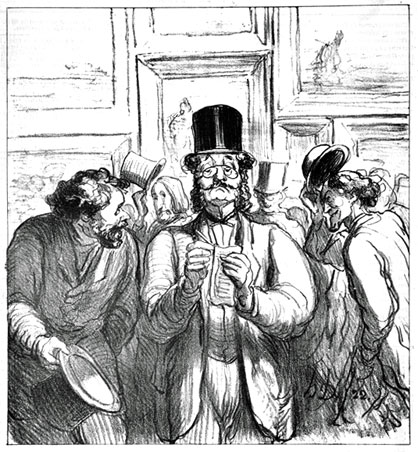 In a way, this is a terrible kind of anniversary to want to celebrate with my book publication. The reaction to Olympia deeply upset Manet. And yet, 150 years later, who cares who Jules Claretie was or what he said? I know the only people I care about are Manet and Victorine Meurent.

I don’t have the exact date for the Salon of 1865, but I do know that in May, Manet wrote to his friend Baudelaire about the scandal and criticism:

“I truly wish you were here, my dear Baudelaire, for insults rain down on me like hail, and I have never before found myself in a situation like this…”

On May 11, 1865, Baudelaire replied with a severe note to Manet in which he said, “Do you think you are the first man placed in this situation? Is yours a greater talent than Chateaubriand’s and Wagner’s? They too were derided. It did not kill them.”

Maybe Baudelaire was just trying to practice tough love, but I think Manet probably could have used a different kind of show of support at this time.

(The text of Manet’s letter and Baudelaire’s response comes from Beth Archer Brombert’s Edouart Manet: Rebel in a Frock Coat.)