Where does a gaze in a painting come from?

In this post, I’d like to share what Julyan Davis told me about working with the model for By Her Lily White Hand (On the Banks of the Ohio), 2012. 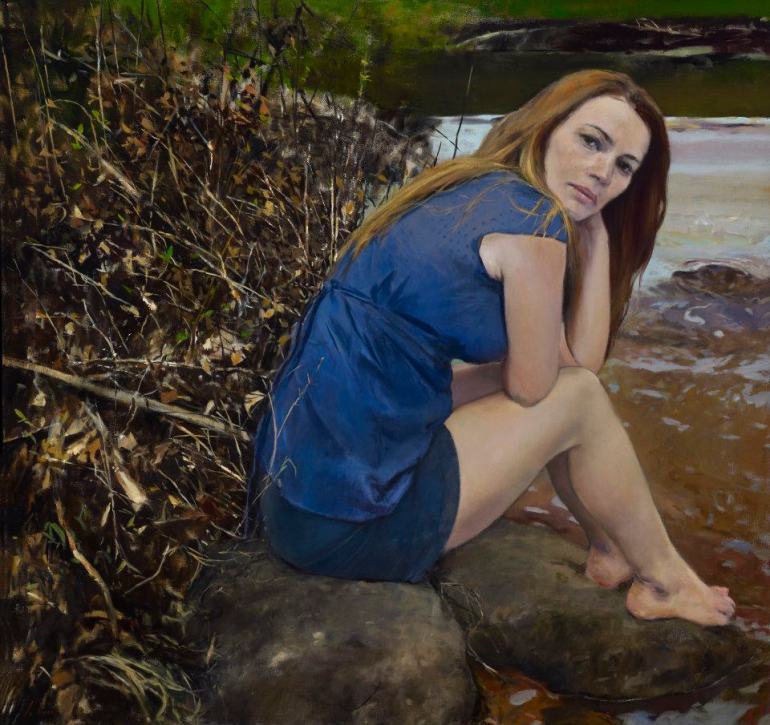 When I emailed Mr. Davis, I asked, “When you asked the model to pose for the work, did you ask her to think about anything? To keep anything particular in mind?”

In his reply, Julyan Davis told me that the model was a friend, and that she was, “passionate, risk-taking, worldly-wise, gentle, fierce.” He also stated,

“She seemed perfect for this subject—her face being beautiful, but also showing that she has not had the easiest of lives.”

This is how Mr. Davis described the scenario he asked the model to keep in mind:

“I asked her to look towards me with the following in mind—she is seeing a young man at the very first moment of losing control of himself. She has seen him lose control before. He has asked her to walk with him, and she has literally just rejected his offer of marriage. She knew his reaction might well be murderous, yet still she went with him.  She does not love him, but she very much pities the anguish of his unrequited love, anguish she is causing.

She’s almost a suicide, isn’t she? Many of these ballad paintings are about that—the moment of resignation, the moment of understanding there is no escape to a better life. I asked her to look back at her murderer from a place of experience past his.  She is past her own misery, but she isn’t content, just tired. She is not going to fight him or anything else. The thorny bank itself seems to push her into the water.”

Julyan Davis asked the model to keep a particular emotional narrative in mind as she posed, and certainly that narrative is present in the model’s gaze.

However, in the next part of the email, Julyan Davis told me something that made it clear the model contributed something personal to the painting, too:

“I chose the title ‘By Her Lily White Hand’ without noting that both her hands are hidden. That’s interesting—that she chose that pose. It makes one think about her hands, one cupping her neck, the other draped over her knee. That thought, of such self-enclosing gestures, makes the thought of the violence to come hard to bear.”

The model was the one who determined a crucial part of the pose. She brought something to the narrative, and Julyan Davis was open to it.

A gaze, a self-protective gesture, the moment in time when an artist’s vision intertwines with the emotional understanding of the model—it’s all there in Julyan Davis’s painting.

Go to www.julyandavis.com or www.murderballadpaintings.com to learn more about Julyan Davis and his work.